100,000 People Expected for Gatlinburg 4th of July Fireworks and Parade


Gatlinburg  is home to a number of special events and attractions, but, in summertime, the mountain town is known to hold the “First Independence Day Parade in the Nation.” Beginning exactly at midnight, locals and tourists celebrate leading up to and right through the 4th of July.

The city is expecting this to be the largest attendance to date. Nearly 100,000 are anticipated to attend. With numbers as high as that, this is also planned to be the most patriotic and colorful parade yet.

The 39th annual Gatlinburg 4th of July Midnight Parade will kick off at midnight in honor of military veterans, military heroes and their families. This year, the parade is set to honor U.S. heroes and women veterans.

The crowds who line the sidewalks enjoy the bright colors, festive music and patriotic theme because all the area’s top attractions, restaurants and shows come together for a memorable night to celebrate and honor the special occasion. Retired Army Staff Sergeant Heath Calhoun will be the Grand Marshal of the Gatlinburg 4th of July Parade riding on the Rocky Top Sports World float. Sergeant Calhoun is a wounded warrior who competed in the 2014 Winter Paralympics in Sochi, Russia.

City officials have announced their thanks that he will be representing military heroes as Grand Marshal. Officials also told local news stations they were honored he would be joining in on this special celebration.

The parade begins at traffic light #1A on East Parkway traveling the length of downtown all the way to light #10 at Ski Mountain Road. 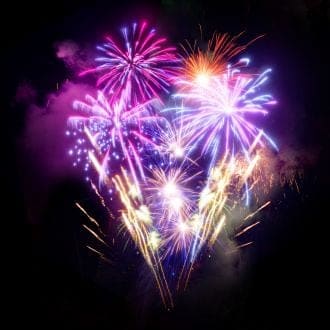 After the nighttime parade from the 3rd to the 4th, a huge fireworks celebration is set to kick off the night of the 4th. Beginning at 10:00pm, visitors can expect a dazzling display of fireworks in the heart of downtown Gatlinburg.

The show usually lasts at least half an hour and concludes with one of the most spectacular finales you’ll ever see!

During the parade and fireworks celebrations, traffic will be heavy through detour areas. Leaving town might take as long as 1-2 hours. Be sure to take extra time if you’re traveling during these times.

If you’re planning to attend any of the Independence Day events, we recommend arriving early to get a great spot, especially for the parade. The fireworks are easy to see anywhere in the area, as long as you have a clear view of the sky.

For a shorter commute to attractions and holiday events, consider staying in one of Parkside Cabin Rentals log vacation homes. Our Gatlinburg cabins near downtown will cut your drive time down and will help you save money on parking.

Some of the best places to enjoy the fireworks are our cabins because of the open views and convenient location. Call our reservationists at (866) 808-7525 to find the right log home for your family’s summer getaway.